Betta (also known as Siamese Fighting Fish) is a species of freshwater fish that is indigenous to the Mekong basin of Thailand, Laos, Vietnam, and Cambodia. They are known for their bright colors and long, flowing fins, which have made them well-liked as ornamental fish in aquariums. Betta fish are highly territorial and can be very aggressive, and males especially are known to participate in territorial displays and even physical fights with other males. 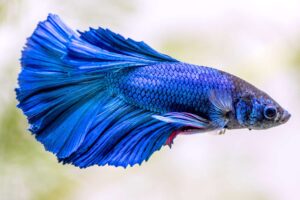 Betta fish are part of the Osphronemidae family, which also includes gouramis and paradise fish. They are carnivorous, and in the wild they primarily feed on insects and other small invertebrates. In captivity, they can be fed a diet of pellets or live or frozen food such as bloodworms or brine shrimp.

Betta fish are highly adaptable and can survive in a range of water conditions, but they prefer warm water with a temperature between 75 and 82 degrees Fahrenheit. They also require plenty of oxygen, so it is important to provide them with an aquarium with good water circulation and plenty of oxygen-rich plants. A filter is also recommended for betta fish. Your fish will be protected from bacteria and other harmful substances by the filter. To prevent chlorine and heavy metals poisoning fish, it is important to treat the water with a dechlorinating agents. These products are commonly sold as “water conditioners”.

Betta fish have an average lifespan of 2-3 years, but with proper care, they can live for up to 5 years. They can grow to be about 2.5 inches long, and males are typically larger and more colorful than females.

In summary, Betta fish are colorful, aggressive, and territorial freshwater fish that are native to Southeast Asia. They are popular as ornamental fish due to their bright colors and long fins, and they require warm water and plenty of oxygen to thrive.

Iconic One Theme | Powered by Wordpress